I’m going to lead off with what everyone wants to know about:
Persistence, FTL, research, alliances, and working cargo on relog will all be put back into the Live server later this week, no matter what.
*throw confetti now*

We will begin “Design a X” backer rewards within the next 4 weeks and it will continue for several months; there is nearly 1000 “Design a X” rewards to be redeemed.
We will be doing them in several stages.
More details about that will be provided in a future dev blog.

Within the next 2 months we will be making dramatic changes to combat, trade, our game framework, graphics, tools and race mechanics.
In the past I’ve said there will be no modding at all, but we will be introducing some limited modding, and possibly extending it further than what is currently planned for it.

In addition to the 4 special volatility effects mentioned last week in the volatility dev blog, there will be kinetic volatility whose field causes damage to all units at randomized intervals and knocks units around.

This version of hull blocking only refers to weapons against hulls and not preventing hulls from passing through other hulls.
In the future we may implement hull versus hull blocking which would open up ramming as an option.
Another possibility we may implement is a special component which slows/stops units that attempt to pass it. 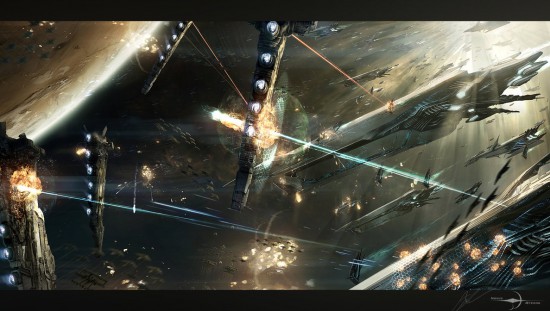 In the future we will allow players to construct “space walls” which can be positioned and used as a shield.

This system will allow players to escort other players merchant fleets and soak up damage while they flee or defend weaker support ships as they repair, resupply and dish out supporting fire.
Hull blocking also makes escort missions possible as before a player could just attack an escorted fleet without having to deal with the guard.