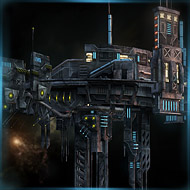 Trading has always been a vital entity within any empire, according to need or surplus.

Within Novus Aeterno, each player may build facilities named markets, which will allow players to set the buying price on specific articles and commodities, as well as the price at which they wish to sell the ones they own.

Once a player has built a market, he will require a means with which to trade. Trade ships can therefore be built to transport goods or resources to other players markets.

Trade ships are, however, subject to raids, and can be destroyed; it is therefore recommended that trade ships receive a fairly strong escort. Trade ships are not automated and act exactly like any other ship, but have the ability to load and unload, allowing them to ferry goods.

The ability to set individual prices will allow for drastic price fluctuations between different areas of the galaxy, due to supply and demand.

There will be no universal market, which will give players the freedom to affect the universal economy in whichever way they see fit.

We wanted to create an extremely open ended market system, which would give players the ability to be part of a living breathing galactic economy in whichever way they feel fit.