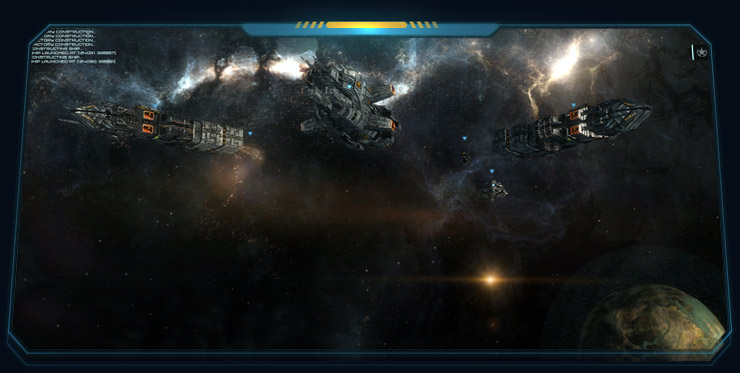 Empires are not forged in a single day.

Once there were five. Five great empires holding the universe in balance. It was an age of physical and metaphysical exploration, of technological advancement and spiritual growth. The Golden Age. But that age has passed. The empires of old have retreated into the shadows of history. Now a new age is dawning. Now, history is what you will make it.

Since the dawn of our history, humans have stared up at the night sky and wondered what lay beyond that ebony veil pierced by shimmering points of light high above. It is, after all, in our nature to question and explore.
And perhaps, most importantly, it is in our nature to dream.

As the centuries passed, our knowledge grew, and as it did, so did the dreams that drove our endless, seemingly impossible quest to conquer the stars. But in time, our knowledge grew so vast that those dreams, grand as they had become, no longer exceeded our reach. We ventured out past that ebony veil, past even those shimmering points of light, into the infinite ocean of black.

What would we find out there in the cosmos? Would there be habitable worlds? Would there be life, and if so, what form would it take? Would it be like us? These are the questions man asked for millennia. Who knew that there were others asking the same?

But what we found were not the answers to our dreams of peace and harmony with other races.

No, what we found were the Veru’nas.

Fearsome in their warring ways, awe inspiring in their immeasurable intellect and staggering physical strength, the Veru’nas wielded technology far superior to our own, and ruled an empire that stretched throughout innumerable galaxies.

As we would soon learn, the sightless aliens, though massive in size when measured against an adult human, were little more than rodents on their home planet Cassus Prime, an unimaginably hostile world of Brobdingnagian Megafauna that dwarfed even the colossal dinosaurs of our own prehistory. As such, the Veru’nas had been forced to rely on their remarkable intelligence in order to persevere and ultimately dominate. They developed a culture driven by ritual violence and an extreme and brutal credo of Darwinian survival of the fittest.
Governed by this rigid code of individual and racial honour, and guided by an unwavering belief in their inherent superiority over all other species, the Veru’nas enthusiastically embraced practices long considered taboo by human societies in the expansion of their pharaonic empire. These included aggressive eugenics and institutionalized slavery.

There was to be no peace with the Veru’nas. All-out war soon followed our fateful first encounter with this virulent foe. It took every ounce of cunning, adaptability, and resourcefulness we humans could muster to survive against such a ruthless, technologically advanced enemy race.
But these were not the only beings waiting for us out in the abyss.

The Veru’nas own creations, the Cauldron Born, were there to greet us as well. A freakish race of synthetics with an unrivaled proficiency in the arena of nanotechnology, the Cauldron Born quickly developed an unhealthy obsession with human culture.

The ancient race known as the Acaeans revealed themselves to be unparalleled adepts at the use of genetic manipulation. Wielding living, bio-mechanically engineered technology that is grown, not built, the Acaeans had devoted their history to not only expanding and improving their empire, but their own physiologies, and the physiologies of others, as well.
The Azsendi were the result of the Acaeans’ tampering.

This species had at one time served the Acaeans as mere beasts of burden, until their masters tinkered with their genetic code, resulting in their transformation into a race of immensely powerful telekinesis. Rising up against their progenitors, an antediluvian lineage of the Acaeans known as the Grell, the vengeful Azsendi embarked on a campaign of genocide that has forever scarred their legacy.

And there were others. More than just this collective we have learned to fear, grown to hate, struggled to fight against, and sometimes sought to align ourselves with. Countless new and unknown races, all waging an unending battle for supremacy in a universe defined not by the stars we once looked to from Earth, but by beings living by the light of stars far more distant than any we ever dreamed of seeing.