Although many of the races in the Novus Æterno universe are actually conglomerations of several closely related, yet divergent species, the “race” known as the Acaeans is unique among all others in that it might be described more accurately as an aggregation of millions of genetically engineered species working together with perfect synergy for the benefit of the greater collective. Each of these species possesses a small number of common genes shared with the others, yet as a result of the Acaeans’ mastery, and ceaseless implementation spanning several millennia, of the most advanced genetic modification technology in recorded history, they vary in their physical properties to such a degree that they represent the diversity of the full spectrum of biological organisms found in the Novus Æterno universe. Ipso facto, an Acaean may resemble something as simple as a fungus or bacteria, or as complex as a sentient spacecraft capable of faster-than-light travel.

Because they are the oldest race in the known universe, and owing to their incomparable biological plasticity, Acaeans can be found in numerous galaxies, occupying worlds in thousands of solar systems, and living under wildly different environmental conditions. It has been estimated by some that perhaps as many as half of all lifeforms in the Novus Æterno universe might be genetically classified as Acaean. 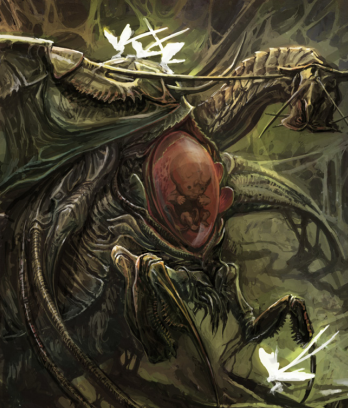 Almost every tool utilized by contemporary Imperial Acaeans is, in fact, a living, biologically engineered organism created solely for the purpose it serves. An Acaean will grow an additional limb or organ, alter an existing, non-Acaean species, establish a flourishing ecosystem, or even develop an entirely new civilization, all centered around the common set of base Acaean genes passed down over aeons of time, in order for their collective to grow in size, power, and versatility across every conceivable front.

Imperial Acaeans think of their empires as “Hives,” which are generally comprised of millions of individual organisms representing thousands of specialized species, all guided by a single, dominating will. The hierarchy within the Hive society is somewhat reminiscent of the social structure found within the colonies of certain insects on Earth, and the various Acaean species in each Hive rely primarily on chemical secretions produced by their own bodies in order to communicate. Because each Hive develops itself to be perfectly suited to a specific environment and task, or set of tasks, it is important to remember that the physical characteristics of individuals in one Hive may vary so greatly from the characteristics of individuals in another that the only commonalities are those existing at the genetic level.

As the human empires of old began to expand into territories occupied by Acaean Hives, it became fairly common to encounter groups of Acaeans engineered to mimic humanoid physiology in order to more effectively interact with their new neighbours.These grotesque homunculi, which can sometimes assume the disquieting form of telepathic human fetuses with fully developed brains, were used to establish diplomatic relations with various human governments and institutions, to exchange resources,ideas, and technology, to study human culture, and perhaps most importantly to the Acaeans, to sample human DNA in order incorporate it into their own, incredibly broad genetic matrix.