From the perspective of nearly all other sapient beings in the Novus Æterno universe, the Veru’nas are unparalleled intellectual titans, and incredibly fearsome physical specimens. The beneficiaries of millions of years of continued micro-evolution, selective breeding, and an almost incomprehensibly brutal warrior culture, the Veru’nas are the masters of the most advanced conventional technology in existence. Thus, given their undeniably formidable nature, and the fact that at one time they oversaw the greatest intergalactic empire in all of recorded history, it is easy to forget that on their homeworld, Cassus Prime, the Verunasi initially sat extremely low on the food chain. So low, in fact, that the typical Veru’nas once spent much of its life in hiding, deep within a series of labyrinthine burrows, eager to avoid the native cornucopia of colossal predators so prodigious in size that they dwarfed even the largest dinosaurs of human prehistory. Physically, a Veru’nas shares a number of common features with certain mammals and marine animals found on the human homeworld, Earth.

They are oviparous, with the females of the species laying anywhere from as few as ten, to as many as eighty, eggs at a single time, similar in many ways to fish and amphibians, and also possess a complex metabolism which allows them to maintain thermal homeostasis in a similar fashion to humans and other mammals, granting them much of the same adaptability in terms of environment. A Veru’nas reaches physical maturity relatively quickly among the large, sapient species of the Novus Æterno universe, and the median natural lifespan is approximately one hundred years.

However, advances in biotechnology have made it possible for the contemporary Veru’nas to extend that lifespan by as many as ten times, and perhaps even more. Indeed, there are rumours of particularly clever and dangerous Veru’nas that have achieved an age of several millennia, although this is unconfirmed. An adult Veru’nas will continue to grow in size, albeit at a steadily decreasing rate, until the moment of its death. Thus, a male Veru’nas that has reached the age of four or five hundred years may be as much as thirty to forty percent larger than a younger adult. Although they are equipped with highly refined senses of touch, taste, and in particular hearing and smell, the Veru’nas are sightless, as they do not possess any organs containing photo-receptors capable of detecting light and then converting it into neuroelectrical impulses. Instead, the Veru’nas have developed highly evolved electro-receptor organs similar, but also far superior, to the ampullae of Lorenzini found in sharks, which they use for precise electro-location and perhaps even primitive electro-communication. 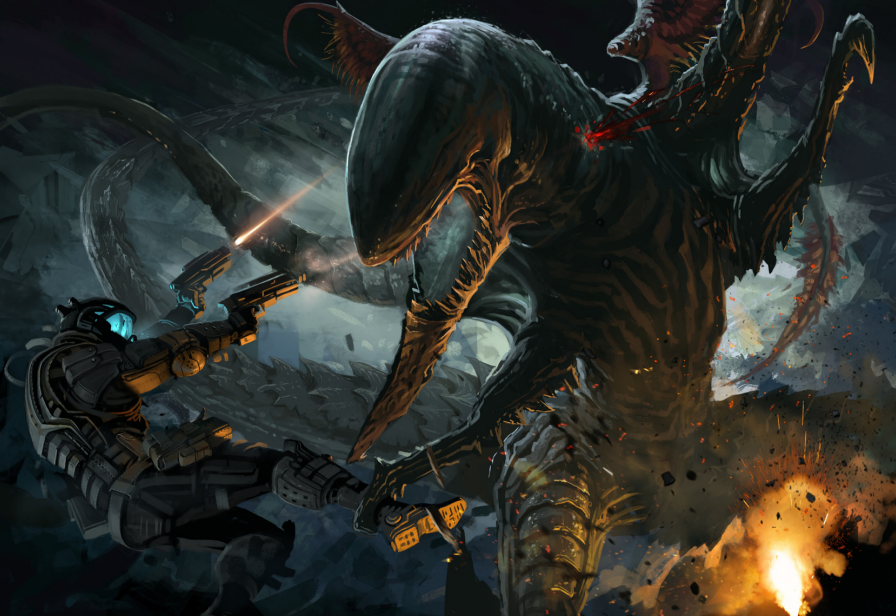 These organs allow the Veru’nas to perceive not only the bioelectric energy produced by all living things, but also the electromagnetic fields generated by planets and other objects of similar size, enabling them to navigate any conceivable natural environment thanks to a kind of innate global positioning system, in addition to detecting other living organisms, even those buried deep underground or submerged in liquid. For creatures that evolved to live a subterranean existence, this ability to detect electromagnetic fields was a key component in their species’ survival, and for a technologically advanced race like the Verunasi, the capability to see and interpret the electronic impulses within complex devices has provided a distinct advantage over other races when it comes to science and engineering. To the Veru’nas, it is considered a great shame to die of natural causes. As a Veru’nas reaches a more advanced age and begins to detect signs of deterioration in its own body, it will typically become increasingly aggressive as it seeks out dangerous situations in which it might die honourably. It is rumoured that the great war between the human and Veru’nas empires of old was started by a desperate First Born Verunas in the twilight of its life.

According to legend, this Veru’nas simply wanted to provoke an incident that would lead to a violent and illustrious demise. On both a cultural and an individual level, the Veru’nas take great pride, and place great value, in intellectual development. However, in their rigidly hierarchical society, physical prowess is still the single greatest factor in determining the ultimate success or failure of a given Veru’nas. Theirs is a race built upon an uncompromising embrace of the principles of what humans might refer to as Darwinian survival of the fittest, where only the strongest and most accomplished Veru’nas are encouraged to reproduce. Only one infant, known as a hatchling, will survive from every litter, having killed all of its siblings shortly after hatching, thus earning the opportunity to climb the ranks of Veru’nas society, a steep uphill struggle against relentless odds that will last its entire lifetime. The sole surviving offspring of a breeding pair’s initial litter is known as a First Born.

In the Veru’nas culture, it is both a blessing and a curse to bear the distinction of being a First Born. They are generally held in high regard, yet their very existence invites the challenge of mortal combat from lesser Veru’nas looking to bolster their position in society by defeating a First Born in close quarter battle. The life of a First Born is made even more difficult by the fact that, as a matter of pride, they refuse to rely on mechanized war armour and many other modern Veru’nas weapons used for personal defence. Thus, it is not uncommon to find an armed and armoured young Veru’nas engaged in a brutal duel with a naked, unarmed First Born elder as other Veru’nas look on.